View by:
Sort by:

Olhos de Água, a Portuguese parish in Albufeira, is a popular tourism resort in Portugal. It is located along the southern coast. Its name means, "Eyes of Water," and it is known for the many excellent golf courses and white sandy beaches. 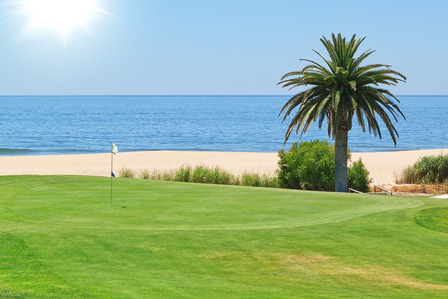 As with any typical coastline resort, there are plenty of water sports, including jet and water skiing, snorkelling, scuba diving and windsurfing.

Albufeira boasts a number of annual events that are held throughout the year in the form of fairs and festivals. In August, Olhos de Água hosts the yearly Sardine Festival, while Albufiera hosts a Balloons Meeting in the middle of June when around 20 hot-air balloons take flight. The coastline is also known for its huge New Year's Eve party in the Algarve.

This popular vacation spot has warm temperatures year round with summer weather averaging 30°C, and each day soaked in cloudless skies and warm sunshine. Although winters are chillier, the temperatures usually do not drop lower than 15°C with 6 hours of sunshine each day. The rainfall amounts are highest between November and March.

The first three months of the year in Olhos de Água, visitors can enjoy days that average 16oC, sunshine for between five and six hours each day and an average of seven days of rainfall each month. There is no noticeable humidity, making it an ideal atmosphere for outdoor activities.

The days during June and July tend to be much warmer, averaging about 27oC while guests on Olhos de Água enjoy around eleven to twelve sunshine hours. There is barely any rain in these months but the humidity tends to rise gradually.

August has a tendency to be the hottest month of the year at 29oC with little to no rain. The humidity becomes moderately uncomfortable but the sun shines brightly for about eleven days with only a smattering of rain. The temperature begins to decreases lightly in September, as do the hours of sunshine. Rainfall starts to increase while the humidity is no longer evident.

The weather changes become more dramatic during October, topping out at only 23oC and the sun only shines about 7 hours per day. That month brings much more rainfall, affecting about eight days, while there is no humidity to make the traveler uncomfortable.

For those who enjoy wintering in this desirable vacation haven, the weather in November and December can drop as low as 16oC with only about five to six days of sunshine each month. Although the humidity is quite low, the rain can affect the vacationers' time for about ten to eleven days.